Welcome to the blog tour for gripping, thriller, Tea with Rasputin by Rolf Richardson! 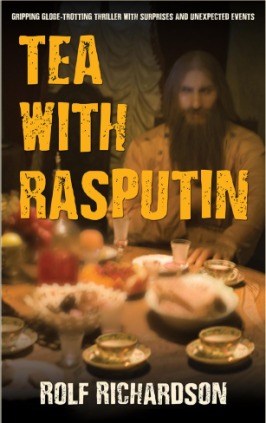 It’s 1992 and during a routine layover in Anchorage Alaska, Greg Wilton (a First Officer with British World Airways) disappears without trace.

Back at airline HQ near Heathrow, Mr Halford, Head of Security, is tasked with finding someone to investigate Greg’s case. His team are working to capacity and no one can be spared. So he scrapes the bottom of the barrel and assigns recent recruit, Terry Jackson to the investigation.

Fresh out of training school and awaiting his first posting, Terry flies to Alaska, brimming with enthusiasm at being trusted with such a mission. There he discovers Wilton rented a small plane while on his layover and both are now missing. His last contact appeared to be with Coral, a waitress at the crew watering hole, The Golden Nugget, so with her help Terry sets out to find the missing airman.

Their quest appears to be hopeless, because Alaska is huge, but they do not give up. The action moves to Hong Kong, Miami, Oxford (England) and finally St. Petersburg for Tea with Rasputin, a ten year globe-trotting saga with many twists and turns.

Join Terry in his investigation, where intrigue, suspense, mystery, humour and even a little romance lie in wait. 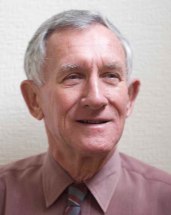 ROLF RICHARDSON is a mongrel English/Norwegian who loves to travel, starting with service in the RAF, flying Britain’s first jet fighter, the Meteor; thereafter 25 years as a British Airways pilot on Argonauts, Britannias, VC10s and 747s.

He then became a roaming photographer, visiting around 110 countries, with over 15,000 photos now sold. He has worked his passage on cruise ships by giving lectures. Taken 3 months to drive round Australia.

A few years ago he set out to put his experiences to further use by writing a series of ‘Easy Read’ books: thrillers with a dash of history, romance and humour.

B is for Book Reviews (Spotlight) https://bforbookreview.wordpress.com

An author and friend of mine recently released another book that you should check out. It is called The Little Breadwinner: War and Survival in the Salvadoran Heartland by Lucia Mann.

Synopsis: FROM 1980 TO 1992, A TURBULENT CIVIL WAR ravaged the Central American state of El Salvador, claiming the lives of approximately 75,000 Salvadorans. The Little Breadwinner is a story of tyrannized, frightened families—mostly poor peasants, indigenous peoples, and child farm workers—whose lives signified nothing to the military death squads.

Lucia Mann, who was in El Salvador at the time, recalls this vivid historical portrait of human rights violations during and after the “dirty” war between the military-led government and left-wing Farabundo Martí National Liberation Front. This brutal conflict was backed politically, economically, and militarily by the United States with CIA involvement.

Throughout these pages, you will experience intense trials of courageous survival with unforgettable characters who yearn for peace, justice, and normalcy. One of the brave women you will meet is Estella Godwin Lozano (a Waorani tribe descendant of the Amazon rain forest), who suffered terribly before her brutal demise in Laredo, Texas in 2019. She was a “little person” who became traumatically affected by the abuse perpetrated by National Guard soldiers outside her pueblo home. She heroically joined the Sandinistas (Cuban-backed guerillas) to seek revenge upon the villains of her country.

Buy the book on Amazon!

I created an original book tag and am super excited about it! I present to you the Barking Bout Books Tag!! My dog Max recently passed away and I decided to make this book tag in remembrance of him. I would love to see your renditions of this tag! Let me know in the comments below what you think of the tag. Check out the video below: