Welcome to the blog tour sci-fi/ horror Sand and Shadow by Laurisa White Reyes! Read on for more details and a chance to win a $20 Amazon e-gift card!

Mission Specialist Adán Fuentes awakes from cryo-hibernation to discover that most of his fellow crewmates are dead and the shuttle Carpathia is not where it’s supposed to be. Surrounded by a vast barren landscape, he and the other survivors wonder how they can accomplish their mission, to establish a home for future colonists.

When an unseen creature attacks them, the Carpathia’s crew must turn their attention to surviving and solving the true purpose behind their mission.

Inspired by the 50’s sci-fi flick FORBIDDEN PLANET, SAND AND SHADOW plumbs the depths of the human psyche and the power of its influence. As the Carpathia’s crew’s secrets and flaws are revealed, readers may find themselves compelled to examine their own dark places.

“Hold it here!” Adán jabbed a finger at the corner of the tent still attached. Tink obeyed, gripping the fabric with his gloved hands. Adán grasped the canvas several feet above Tink. Then he began to pull it, gradually drawing the fabric toward him. It was like trying to haul an anchor up from the ocean floor, the effort requiring every ounce of strength he could muster. He wasn’t sure his plan would work. He was battling a storm that at any moment could snatch him up and carry him off.

“Get me down!” Scott screamed, his voice piercing through Adán’s comm.

“I’m trying! Just hold on!” Adán kept pulling, but he made little headway with the wind pulling so hard in the opposite direction. “Scott, use your hands! Try to climb down!”

Scott started hand-over-hand down the column of living canvas. The distance between Scott and Adán slowly began to shrink. The sand pelted Adán so hard now that he could feel it through his gear.

“The rest of you get inside!” he called out. “It’s too dangerous out here!”

Fess grabbed the heating unit that Scott had dropped and made his way toward the shuttle. Tink held tight to the tent behind Adán.

“But you have to—” Suddenly, a powerful gust tried to rip the silver tarp from Adán’s hands. The knuckle in his pinky finger snapped in a stabbing flare of excruciating pain, but he did not let go. Scott flipped around in the air, as helpless as a marionette on strings, though he was a good eight feet closer to the ground than he had been minutes before.

Adán tried to hold tighter to the fabric, but the pain in his hand throbbed ruthlessly and had robbed it of its strength.

“Scott! You’re going to have to let go!”

“Let go? Are you insane? This wind will blow me away like a kite!”

“Curl up into a ball! Wrap your arms around your knees and drop to the ground!”

Adán heard Tink’s voice. “This strap is tearing! When it rips all the way, that tarp is taking you with it, Scott!”

He did. Scott released the fabric and pulled his knees to his chest. He fell like a stone to the sand below. He hit the ground, his limbs sprawling out in every direction. Then, getting to his hands and knees, he scurried away like a bug just as the tarp tore free from its strap. The silver snake curled and whipped like a flag in a hurricane and then vanished into the darkening sky.

Adán, his back to the wind, dropped to his knees beside Scott. “You all right?” he asked. “Can you get up?”

Scott collapsed into the sand, moaning. Adán felt a wave of relief. Their commander was dazed, possibly even hurt, but he was alive. A few yards off, Tink fought against the storm’s assault. He clutched the transmitter case to his chest and staggered forward one step at a time. The sky was so dark now and the sand so thick that the shuttle looked like nothing more than a broad mass of shadow.

Adán slid one of his arms beneath Scott’s shoulder and hoisted the barely conscious commander into a sitting position. “Dryker, listen to me! We’ve got to get back to the shuttle or we’ll die out here! Get up, Commander! On your feet!”

Scott moaned again, but Adán felt his muscles stiffen as he attempted to get his legs under him. With a bit of effort on both their parts, Scott was soon standing, though he leaned much of his weight against Adán. Adán looked back at Tink, who hadn’t made as much progress as he’d hoped.

Tink shook his head furiously. “We need it to communicate with the other shuttles! They’ll never find us without it!”

Tink’s words came back to Adán broken and staccato. He tapped on his earpiece. The storm had damaged his comm. “Tink? Can you hear me?”

This time Adán heard only static. He looked back to the shuttle, a mere ten yards away. Dema and Fess, clinging to each other, were scrabbling for the hatch lever. Adán looked back at Tink, half that distance behind him. He’d get Scott to safety, he decided, and come back for Tink.

“I’ll be back to help you in a second!” he said, though he couldn’t be sure if Tink had heard him, then he trudged forward with Scott in tow.

The two minutes or so that it took for him to hand Scott over to Dema and Fess felt like hours. He was exhausted and in pain, but Adán turned and headed back out for Tink, now on his knees hunched over the transmitter just four or five yards away.

He had just reached him when Adán saw it—a dark mass rising up from the ground behind Tink. “What the hell is that?” he said more to himself than to anyone else.

Dema’s voice crackled over the comm. “Adán, do you read me? Scott’s okay. A bit stunned but okay. Fess is with him in the common room now. Do you have Tink and Lainie?”

Lainie. Adán had forgotten all about her. But Tink. . .

“There’s something out here!” said Adán.

There was a pause before Dema’s voice returned. “Adán, get out of there. The sensors are picking up something solid, something big!”

He reached Tink and pulled him to his feet. Together, with the transmitter still clutched in Tink’s arms, they staggered toward the shuttle, which they could now barely make out through the thick haze of sand.

“Lainie!” Adán waited a moment for a reply. “Lainie, do you read me?” He shook his head. “The storm’s interfering with the frequency!”

“She was carrying the generator,” said Dema, her words nearly impossible to make out through the static. “She was closer to the shuttle than we were. You should see her!”

Adán and Tink continued trudging forward. Then just to right of the shuttle hatch, they spotted something square and black half buried in the sand at their feet. It was the generator tipped onto its side, but there was no sign of Lainie. 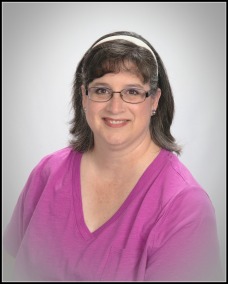 Laurisa White Reyes is the author of the SCBWI Spark Award winning novel The Storytellers and the Spark Honor recipient Petals. She is also the Senior Editor at Skyrocket Press and an English instructor at College of the Canyons in Southern California.

B is for Book Review (Spotlight) https://bforbookreview.wordpress.com

The Magic of Wor(l)ds (Spotlight) http://themagicofworlds.wordpress.com

Try out Emily’s Lair! It is a witch themed thriller novel.

Synopsis: Investigating a grisly murder, detective Will Heller finds himself drawn to person of interest Emily Kostova, the owner of a local bookstore. Emily’s broad knowledge of the Whitechapel murders, and of Jack the Ripper, persuade Will that his conversations with her might help him catch his killer. It is through these discussions that Will learns of Liesbeth Janssen, a woman accused of witchcraft in the seventeenth century.

When additional murders bearing the same bizarre characteristics provide enough evidence to clear Emily, Will is finally free to act on his powerful attraction to her. As they grow close, however, what he discovers about Emily, and about Liesbeth, convince Will that the woman he loves may be harboring a terrible secret.

Giving the reader a harrowing ride between the infamous witch hunts of the 17th century and the present day, Emily’s Lair is a suspenseful page-turner of speculative fiction by Cary Grossman.

Cary Grossman got the idea for his first book after spending two decades in retail management, a career in which he found little to inspire him. It took him over ten years to write his first novel, creating a story and with painstaking care learning the craft of turning it into a novel. His goal was to make page-turners; books that would get the reader involved from the first page. Two years ago, he abandoned retail for good and became the caretaker of a church, a career that leaves him plenty of time to write!

I decided to start a new series on my channel where I highlight the upcoming book releases in the next month and so this is my first in this series. Check out all these great books coming out in September 2021! Let me know if you are excited about any of these in the comments below.