Welcome to the mini tour for the action-packed sc-fi, Hive. This is the first book in a brand new series called The Arcane Volumes by Jeremiah Ukponrefe!

The Collective military has spent its years destroying the last remnants of The Hive, an alien force that devastated the old world. bringing forth the apocalypse, and ushering a new age of warring factions.

Alexander King is a Collective soldier who during a mission monitoring the outskirts of Zone 6, discovers evidence that the Hives presence is stronger then commonly believed. With his new information it becomes vital that The Collective acts fast, for if they don’t the world will be brought to its knees again in a wave of destruction that will end humanity forever.

Alexander King stood tall, glaring down at the citizens that hurried along the muddy streets.

He had no interest in eavesdropping on their whispered conversations; their words were of no importance to him.

The market was built on dirt, but its upper layer had slowly transformed into mud over time, by the light rain. Wooden carts and stands, stacked with savory meats hanging on rusty hooks, ragged furs strewn atop the table, red wine in dusty bottles, and even delicate jewelry, were scattered throughout the streets; remnants of the Old World.

All the sellers acquired their merchandise using the same method: thievery. Prior to the Collective’s occupation of the dead city, the citizens had raided all the abandoned buildings, later claiming that everything they had was their own.

“We have to get out of this soon,” said Alex, fixing his obsidian mask, until only his brown eyes were visible.

“Nothing wrong with guard duty,” countered Takeo,” It’s what we’ve been asked to do, so we should do it properly.”

Alex rolled his eyes at Takeo.

His partner stood a head taller than him, and was much more muscular, nearly double his size. Like Alex, he too wore the sleek grey jumpsuit and obsidian mask, of the Collective.

The two men not only differed in size, but weaponry. Takeo held

“I’m just bored of doing nothing.”

“We’ve been given a great position.” Alex snorted.

Takeo was never one to indulge in his valid complaints, never willing to speak an ill word of the Collective’s inner workings.

Eventually, his eyes turned to the inner city’s skylines, where gray clouds shrouded the tall buildings; it was the one place he wanted to be.

His eyes quickly turned back to the market, and he tightened his grip on the AK-47; something suspicious was underway. A young boy in his mid-teens, not far from Alex’s own age, handed off a steel case to the first man in a long line of buyers.

“We should call reinforcements,” stated Takeo, as he pulled his shotgun closer.

Alex shook his head, not taking his eyes off the boy. “Just follow my lead.”

Alex marched towards the stand, with Takeo following behind. He gestured to his partner,

and they both improvised a new position, forcing the common people to diverge.

Alex intervened within the line, cutting off the man whose hands were inches away from the case. The young seller retracted the object, and glanced behind in fear… 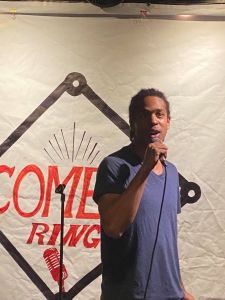 Jeremiah Ukponrefe is a Vancouver based author and stand up comedian. He has written articles for The Runner, and The Reel Anna. His debut novel Hive is releasing March 2021. As a comedian his style is a mixture of clever observations with a subversive darkness, all performed under a veil of innocence. He has performed in the Comedy Ring, Rick Bronson’s House of Comedy, and Yuk Yuks. He is really hoping this art thing works out.

I’m here with another top 5 list! This time I am doing my Top 5 Best LGBTQ+ Books That I Have Read So Far! Let me know if you have read any of these books and if you have recommendations for me to read in the comments below.
Check out the video below: