If you haven’t heard about the Highglade Series yet, check out the cover for Awaken the Three by D. L. Jennings, a must read for Fantasy lovers who love imaginative new worlds and epic adventures! 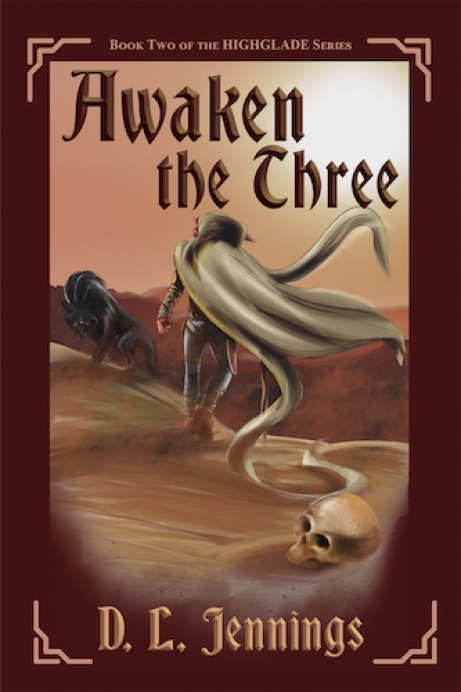 Beyond the Wastes of Khulakorum, a storm is rising . . .

The Shaper of Ages is gone, and along with her, the Breaker — yet gods are not the only threat to the peace of the living.

Aldis Tennech, the once-great general of the armies of Gal’dorok, finds himself in exile. His only hope of reclaiming glory lies in the hands of a self-proclaimed emperor, and the unearthly powers that put him there. Meanwhile, improbable alliances are forged in the north as unexpected enemies rear their heads and threaten ruin-with a single thread in common, connecting them all.

In the sequel to his award-winning novel Gift of the Shaper, D. L. Jennings once again brings to life an epic tale of war and chaos as earthly armies fight for otherworldly prizes. Ancient powers lying dormant must be called upon, bringing strength to those who need it and conquest to those who seek it; battles will rage and cities will fall, but only the most desperate or reckless would seek . . .

Gift of the Shaper (Highglade #1)

For thousands of years, the Breaker of the Dawn has been locked away in the ethereal plane of the Otherworld. Now, a young blacksmith’s apprentice finds himself trapped in a war between the noble Athrani, a subset of humanity gifted with the ability to transmute matter, and the malevolent and powerful Khyth, who seek to free the ancient god from his prison.

When his father, Olson, is kidnapped, Thornton Woods and his childhood friend, Miera, must leave their small village of Highglade to find him. On their way, they are joined by Ynara and Kethras, cat-like humanoids called Kienari, who use their skills as hunter/trackers to follow Olson’s trail. When it comes to light that one among them possesses the key to the Breaker’s release, Thornton and his friends must defy the might of the Khyth as armies on both sides collide in pursuit of the ultimate prize.

Gift of the Shaper chronicles the epic struggle between the existing forces of good and evil, with both sides vying for control of the key that unlocks the Otherworld. The very powers of creation and destruction hang in the balance, and only a heroic effort by Thornton and Miera, backed by the power of the Athrani, can possibly stop the Khyth from unleashing ruin — and the Breaker — upon their world.

Once again, D. L. Jennings, who won the “Beverly Hills Award for Fantasy” in 2018, brings life to an epic tale of war and chaos as earthly armies fight for otherworldly prizes. Reminiscent of Game of Thrones, AWAKEN THE THREE is a riveting page-turner, and a must-read for fantasy readers who want to escape to a different world, time and place ruled by other-worldly beings. It’s the perfect book to escape from the anxious times of our COVID-19 reality.

D. L. Jennings is a fourteen-year active-duty veteran of the United States Air Force, serving under the Air Force Special Operations Command. In 2005, he earned his associate degree after graduating at the top of his Korean class at the Defense Language Institute Foreign Language Center in Monterey, California, and earning the Korean Consul General’s award for excellence. He is a graduate of Bellevue University in Nebraska, earning a bachelor of science degree in security management in 2008. He finished writing his debut novel, GIFT OF THE SHAPER, which won the Beverly Hills Book Award in 2018 for Fantasy, while serving on his ninth combat tour. He has been deployed to Iraq and Afghanistan as well as several countries in Africa. When he is not reading or writing epic fantasy, he enjoys traveling, listening to ‘90s punk, and watching Ohio State football. Jennings lives in South Florida

It’s that time of year again where we take our final exams for the Magical Readathon and this will be the last one because G from Book Roast will be switching it up which is sad but understandable. So these are all the books I will be reading for my NEWT exams. Check out the video below: