Welcome to the book tour for The Gate of Aleph (Seven Gates of the Kingdom Series) by J.H. Ellis! Read on for more info! 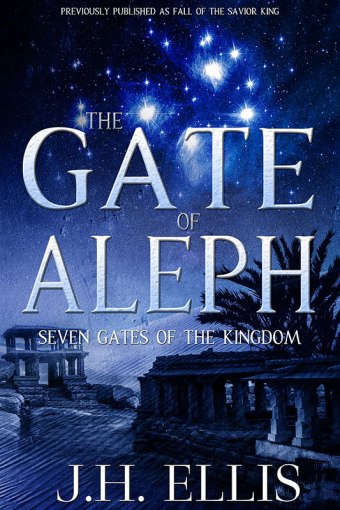 The dying King Aikah suspects the flesh-eating Mikana will attack the kingdom of Seth once again. He summons his estranged son Shammah, who reluctantly heads home after a three-year exile. On the way, four mysterious creatures intercept Shammah, forever changing the scholar-soldier’s destiny as Aikah’s chosen heir while preparing him for Seth’s greatest war.

Shammah is a scholar-soldier who can’t overcome his past. He’s haunted by the deaths of thirteen men during a skirmish with the Mikana giants. Because Shammah disobeyed his father’s military orders, King Aikah exiles him. For three years, Shammah sails the seas, roaming the world. He’s an heir without a throne.While Shammah is away, Aikah falls ill. Even the moon goddess Livnath refuses to save his life. Meanwhile, the Mikana threaten to seize the kingdom. Aikah knows he won’t live to lead his people into battle, so he summons Shammah back home. Shammah returns with reluctance. Before he reaches Aikah, four mysterious creatures guide him to Mount Aleph. On the mountain’s rocky terrain, Shammah wrestles with his inner fears. Will he vindicate himself and find rest and love? Will he become the king his ruthless father never could?

J.H. Ellis is a former journalist who writes biblically inspired fantasy fiction. The 66 books from Genesis to Revelation carry more power and truth and motivation than all of the great libraries of the world.

From antiquity to the here and now, the Bible is an endless exploration project God has provided for every generation of human beings. Ellis started by diving into the Bible’s depths by pondering its supernatural narratives.

Captivated by the diligent research of author Reona Martin about the biblical origins of the Nephilim, giant beings who were the first-generation offspring of rebellious angels, Ellis asked if she could build a story around her discoveries. Martin agreed and The Seven Gates of the Kingdom trilogy is the result.

I had my 30th birthday over the weekend and was spoiled with a bunch of packages so I did an unboxing video of all the goodies I hauled. Thank you so much to everyone that sent me gifts! You made my day that much more special! Check out the books I got and let me know if you have read any of these in the comments below!