Great news Demon Hunter fans! Azaaa Davis is getting ready to release the third installment in her Nadira Holden, Demon Hunter series! If you haven’t read book #2 That Night yet, you still have time! Read on for details and a chance to win a fabulous giveaway!

All Nadira Holden wants is to preserve the last of her soul and create a new life free of magic, demons, and war.

Her involuntary bond with a succubus makes her desires impossible. The threat of this disgruntled demon possessing her urges Nadira to find the succubus’s missing body.

Nadira’s only hope of avoiding demonic possession lies with Derek, the only demon she can tolerate without slaying. Except, his hands are full trying to secure his recently-inherited title of prince. Desperate, Nadira agrees to help Derek secure his title by experimenting with the deadly magic they once generated in exchange for his aid in her investigation.

To untangle herself from the evil that surrounds her, Nadira must be willing to betray her friends and get cozy with her enemies. She may even have to do the unthinkable: break the peace treaty that allows demons and humans to coexist. If she can’t toss aside her scruples, Nadira may not make it out of this ordeal with her soul intact.

Excerpt from This Night (Book #1)

NADIRA WOKE UP ENCOMPASSED IN EMPTINESS. It was as if she were in a void with no light or sound to give her a clue about her location. The air was musty, and her throat was scratchy. Nadira coughed.

“Hello?” she croaked, triggering more dry coughing. She cleared her throat and tried again. “Hey! Can anyone hear me?”

Nadira felt a solid surface along her back and behind her head and legs. She understood she was lying somewhere. Nadira tried to touch her surroundings and could barely move her arms before they hit the cushioned ceiling mere inches above her. As she continued to move, her elbows hit the cushioned sides, and her knees hit the ceiling. Feeling surrounded, Nadira realized she was in an enclosed space. Taking a deep breath, she tasted stale air. Some kind of crawlspace or trunk was her best guess.

After a long night of sleep, Nadira expected to feel ready to tackle another day. Summer was the peak of training season, and Nadira was looking forward to a few weeks of scrimmages that would allow her hunters to show off and make her look good as team leader. Instead of feeling refreshed, her body was sore, her head ached, and her stomach was empty. She felt a weakness and discomfort that only happened when she mistakenly slept for far too long. But, what am I doing here?

She tried to keep her breathing even and decided to feel around with her hands for a doorknob or latch. Behind the cushion that surrounded her on all sides, she felt a more solid barrier, like wood. Was someone playing a cruel trick on her? Nadira’s racing mind landed on Melissa—the girl that hated her success in class and on the training mat. Nadira usually ignored her, and all the other annoying cohorts. But, that didn’t stop them from whispering about her and occasionally playing pranks.

“Let me out!” she screamed with all her might. The sound was hoarse, almost a growl. Nadira hit the wooden ceiling as hard as she could. No response. No one ran away in fear or came closer to open this padded, wooden cage. Her breathing was no longer controlled. She practically hissed, her breathing was so rapid and shallow. Breathe deep, Nadira commanded.

This couldn’t be Melissa’s doing. It wasn’t her style. Besides, Melissa was preoccupied lately with Devon, her new boyfriend. One of Melissa’s flaws was that she couldn’t multitask, especial when a guy was involved. After ruling Melissa out, Nadira asked herself if this was a training exercise. Countless times, Nadira and her team experienced grueling trails designed to test a hunter’s lethal effectiveness against monsters. But, she was far beyond her student days of trick interrogations and unexplained battle simulations. At the very least, there would have been some whisper about her team getting tested. Nadira concluded that this couldn’t be a training exercise either.

Her shallow breathing was the only sound she could hear. It caused the air to become hot. Her heart raced again as she considered the awful possibility that an enemy captured her overnight. Although she should, she didn’t remember going to bed last night. Actually, she didn’t remember anything . . . Nadira’s hands started to shake. Cold sweat made the fabric of her nightgown stick. She felt like a disgusting mess. She was never a mess. She was strong and focused. She was a warrior.

Think, Nadira commanded herself. Someone has you trapped in a cold, dark place. For a second, she considered staying put and waiting for a rescue. That second passed quickly. Nadira preferred to rescue herself. She also considered preparing for the next time her enemy came to check in on her. Once, she escaped from a car trunk by fighting her way out when the vehicle stopped. The trick was to listen for your moment, and time it just right. Yet, somehow, she didn’t think she had enough air to wait around for anything other than death.

She was not afraid to die, no demon hunter was, but she wasn’t ready either. It was simply not her time. With that thought, Nadira ripped and tore at the ceiling of her confinement. Self-discipline and skill helped, but her genetic makeup—unique to Children of Orion—gave her the brute strength needed to destroy her cell. Silky cushy fabric gave way to wood. Wood chips, chunks, and splinters finally gave way to solid dirt.

She was panting, already exhausted. She wasn’t sure how many minutes went by, but the solid dirt indicated that she still had a long way to go. She couldn’t see her hands in front of her, but she could feel the cuts and bruises she was inflicting on herself in her effort to escape. Nadira’s hands were bloody and cramping from the repeated motion. She kept digging. Ignoring pain and discomfort was something that all demon hunters were taught. I can do this.

She took a moment to pull her nightgown over her face as a makeshift mask. With her eyes closed, she kept at it. As the hole got bigger, more dirt slid into the box she was in. The weight of the loose soil on her face, chest and upper body was suffocating in its heaviness. She was at the point of no return now that the last of her air was escaping. Yet, Nadira didn’t give in to panic. Focused, she kept digging and pulling herself upward while breathing as best she could with her face covered.

Nadira lost track of time—not that she knew what time it was when she woke up in this nightmare. Her mind was buzzing with a single thought. Survive. Nadira chanted to herself in an endless loop. She got sloppy with her arm movements, with her pulling and wiggling. However long she’d been clawing her way to freedom was too long. She paused, taking a few more shallow breaths through the cloth that was acting as a mask. She wanted to stop, to regain her strength, but she ignored her fatigue. Reaching up yet again, she pulled more dirt down. This time she felt nothing around her fingertips. Finally, there was space!

With renewed determination, Nadira pried and hoisted herself up, kicking her legs as if she was swimming through the soil. Her hands first, then forearms. Next, her head, and lastly her shoulders escaped imprisonment. Immediately, she ripped her nightgown away from her face and took deep breaths of the fresh, crisp air. With a bit of tugging and wiggling, Nadira’s waist, then her hips, her legs, and lastly her feet became unburied. She collapsed next to the hole she crawled out of and looked at the night sky. In the cool wind, fallen leaves rustled gently all around Nadira. She was panting and filthy, covered in dirt from head to toe. But, she was free.

Only when her breathing was back to normal did she move. Sitting up, she was reintroduced to her headache. It forced her to move at an even slower pace. She noticed her hands first. They were a bloody mess. Great. She won’t be holding a weapon anytime soon. The second thing she noticed was the long, soft pink dress she was wearing. It was far from the sports bras and shorts she normally wore to bed. She was filthy, homeless looking, but all in one piece and healthy enough. No time to wonder who changed her clothes, or who bothered to style her dreadlocks—formed by constantly twisting her naturally curly hair until the thick twists became permanent—with white ribbons.

Looking around, she saw that she was in a cemetery. Her sigh of relief was shushed by the wind carrying the sound away. Nadira felt safe for now, knowing she was free and unguarded. Of all the awful ways to kill an enemy, why this horrible yet passive method? To bury someone alive was a sadistic, cowardly and lacking in honor. Only one answer came to mind.

Azaaa Davis is an American author of urban fantasy and paranormal romance novels.

She fell in love with reading as a high school freshman and continues to read, write, and draw today. Her background in social work helps her portray realistic characters in otherworldly–and sometimes terrifying–situations. A New York native, Azaaa currently lives in New Hampshire (USA) with her husband and daughters.

She debuted with This Time, A Nadira Holden Novel, in 2018 about demon hunters, family ties and the magic of love. Azaaa is working diligently to finish writing more fantasy novels while raising her daughters. Thank you for showing an interest in her stories! 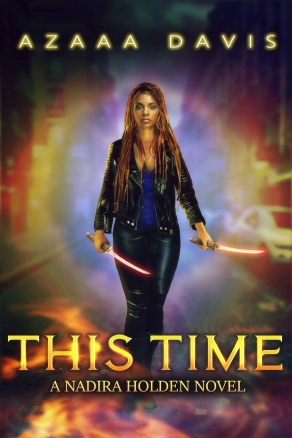 Resurrected into present-day New York, Nadira Holden is asked to save the world … again.

Nadira achieved legendary status when she gave her life to protect humans from the demons. To her, it was yesterday. To the rest of the world, it was twenty years ago.

People have made peace with the demons, worshipping them like celebrities. No one wants to believe that the beautiful creatures who brought magic to humans could be causing the disappearance of so many. When Nadira’s father goes missing, she refuses to play nice. Gloves off. She has to do what she does best. Fight.

Experience why not even death can stop her.

Review copies of both books are available through R&R Book Tours in exchance for honest reviews!

Giveaway: For you chance to win a Fantasy bundle by all-female indie authors of colour, click the Rafflecopter link below!

Check out this book called Dork by my author friend Will Winkle about a guy trying to get his crush’s attention while navigating his life as part of a fraternity house!

His book can be found on Amazon, Goodreads, and his website: WillWinkle.com.

If any of you out there like Brandon Sanderson, then you should check out my latest video. It is a reading vlog of his book Skyward and I had quite a time reading this one!

6 Comments on “Book Spotlight: That Night”