Happy publication day to S.R. Cronin! Check out the latest installment in The War Stories of the Seven Troublesome Sisters! Read on for details and a chance to win a $20 amazon gift card and an Amazon gift copy of the first book in the collection, “She’s the One Who Thinks too Much“!

Do you know what your problem is?

Olivine knows hers. This quiet thirteen century artist has been hiding a secret as she travels to K’ba to meet her friends. Others assume she’s fallen in love with another artist, and it’s not a match Mother would consider suitable. But it’s much worse than that. For on the way to K’ba is the dirt poor nichna of Scrud, a place scorned by other Ilarians. And in Scrud is the one man who understands her.

However, Bohdan recognizes the dangers posed by an impending Mongol invasion. When he learns of Olivine’s unusual visual powers, he convinces her to pick up her bow and start practicing.

She does, though she’s more concerned with producing enough art to run away from home and live in K’ba, where she can paint all day and see Bohdan as often as she wants. If only her sister hadn’t learned of what she can do and decided Olivine and her fellow long-eyes hold one of the keys to defending the realm.

Then, as if life wasn’t complicated enough, Olivine learns the artist community she yearns to be part of has developed a different take on the invasion. They’re certain the only way to survive is to capitulate completely to the Mongol’s demands. Artists who feel otherwise are no longer welcome.

Where does her future lie? The supposed invasion is coming soon and Olivine doesn’t have much time to decide.

The War Stories of the Seven Troublesome Sisters consists of seven short companion novels. Each tells the personal story and perspective of one of seven radically different sisters in the 1200s as they prepare for an invasion of their realm. While these historical fantasy/alternate history books can be enjoyed as stand-alone novels, together they tell the full story of how Ilari survived.

Which sister do you think saved the realm? That will depend on whose story you read.

We lay together afterwards, talking as people do. I shared my ideas of living on my own in K’ba and he shared what he’d worked on recently. I’d already seen a set of beautiful bowls he’d carved with the knife I’d bought him. Now, he turned to a bin near his mat and pulled out a handful of small shivs, sized to fit in a skirt pocket.

“Our leaders in Scrud worry about these Mongols, too,” he said. “They worry the army won’t bother to defend the likes of us. But I’ve been thinking about the women in Ilari. We’ve heard what happens to females in an invasion. The idea of … my mother, my aunts, my sisters. It just makes me sick.”

“I know. I thought I could make these, and give them to women to carry. Here, hold this.” He put one of the shivs in my hand. “What do you think? Could you defend yourself if you had this?”

I held the tiny weapon tight. Perhaps I imagined it, but the wood felt poised to defend me if I needed it to.

“I could do some damage, if it was up close and personal, which I guess it would be. And a surprise. Then maybe once they discovered how dangerous Ilari women are, they’d think twice before assaulting us.”

He nodded. “That’s what I’d hope for. I’m going to start making as many of these as I can. Give one to every woman I meet.”

I looked around at his meager belongings. There were no comforts to speak of. None. “Bohdan, don’t you think you should sell them? At least for a little something?”

“How could I do that? Come on, Olivine. No woman should have to pay me to keep herself safe.”

Then he looked at me and his eyes softened. He reached out and took a piece of my long bronze hair between his fingers and looked into my eyes. He’d already told me how much he loved their intense green color. I expected him to compliment them again, but instead he said “I wish you were more of a fighter.”

I raised an eyebrow. “I rather thought you liked me the way I was.”

He looked down, embarrassed. “Oh, I do. I mean I wish you had more ways to look out for yourself. You’re just not that physical, and I think force is all these monsters will understand.”

“I have physical skills.”

“Yes, so you’ve demonstrated. I don’t mean those, you’re great in that area.”

“I don’t mean in that area. They made me learn stuff in school, told me I had to develop my body to be well rounded.”

Right away I regretted saying it. The Royals of each nichna prided themselves on sponsoring basic education for children, everywhere but Scrud. If Scrud even had Royals, which I wasn’t sure they did. I’d already learned Bohdan was embarrassed he’d never been to school, although an older sister had taught him to read and write some.

“So what did they make you learn?” he asked.

“How to shoot with a bow and arrow.”

“Seriously? Are you any good?”

“I used to be. Surprised everyone, most of all me.” I paused. I hesitated to talk too much about the many things I’d gotten to do over the years, because Bohdan had been offered so few opportunities.

“I do this thing, it’s hard to explain, but if I focus on something small that’s far away, like a flower or a bee or a leaf, it comes into clear focus while everything else goes blurry.”

“Sounds useful for an artist.”

“Oh, it is. I used to think everyone could do it. I mean, who talks about how their eyes work, right? But when I was in Pilk I found out it’s called being a long-eye and it’s uncommon. Some artists have it but most don’t. Anyway, it helped me with archery, too. I got a kick out of shooting arrows and being good at something like that.”

He’d gone back to worrying. “If I asked you to pick up a bow again and practice, would you? For me?”

“Of course, but why? You know I’m trying to make as much art as I can so I can move to K’ba. There are only so many hours of light in a day.”

He just wasn’t going to stop fretting about the Mongols. I rolled my eyes.

“Okay. A little archery every day, I promise. The sunshine will do me good.”

Available on Amazon US & Amazon UK

She’s the One Who Doesn’t Say Much will also be available on B&N, Kobo, Apple, and Smashwords in late August. 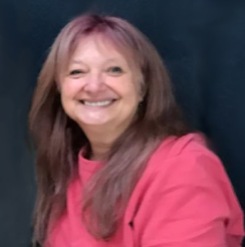 Sherrie Cronin is the author of a collection of six speculative fiction novels known as 46. Ascending and is now in the process of publishing a historical fantasy series called The War Stories of the Seven Troublesome Sisters. A quick look at the synopses of her books makes it obvious she is fascinated by people achieving the astonishing by developing abilities they barely knew they had.

She’s made a lot of stops along the way to writing these novels.  She’s lived in seven cities, visited forty-six countries, and worked as a waitress, technical writer, and geophysicist. Now she answers a hot-line. Along the way, she’s lost several cats but acquired a husband who still loves her and three kids who’ve grown up just fine, both despite how eccentric she is.

All her life she has wanted to either tell these kinds of stories or be Chief Science Officer on the Starship Enterprise. She now lives and writes in the mountains of Western North Carolina, where she admits to occasionally checking her phone for a message from Captain Picard, just in case.

You guys spoiled me so much!!! I unpacked so many boxes in this massive birthday book haul because you all sent me gifts for my birthday. Thank you so much for being the kindest people and spoiling me on my special day. I have so many new books to read and I am excited to show you. Let me know if you have read any of these in the comments below!

2 replies to Book Spotlight: She’s The One Who Doesn’t Say Much