Welcome to the tour for Masters & Beginners, by Daley Downing, book one in The Order of the Twelve Tribes series! Read on for a sneak peek, and a chance to win a signed copy of the book! 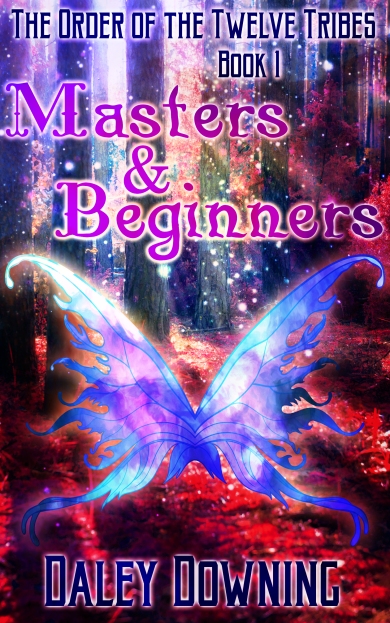 When Sophie Driscoll’s grandmother dies, her parents take over running the Annex, a warehouse facility that stores magical artifacts and documents proving, and protecting, the existence of faeries. Sophie and her brothers, Flynn and Cal, happily adjust to a new house, new friends, and a new way of living, joining the ranks of generations who have kept the fey and mortal realms separate for centuries. Before the first month of their new life is over, they’ll encounter romance, elves, talking cats, ancient secrets, and potentially lethal danger. What could possibly go wrong…

It wasn’t a dark and stormy night. It was a pleasant late summer’s evening, shortly after sunset, the sky a rich navy blue, stars beginning to twinkle in the distance. In a pleasant subdivision, residents were settling in for the night. In a tent pitched on one of the well-mowed lawns was a group of four teenage girls, in their pajamas and sleeping bags, currently finding out who could come up with the scariest scary story.

“…and to this day, he wanders the woods, looking for his head.”

“Can I just say, eew.” Margaret wrinkled her nose and frowned disapprovingly.

“That was the Headless Horseman. That’s not an original story, Kimberly.”

“Fine! You come up with something better.” Kimberly flopped down onto her pillow.

The tent was pitched in a backyard just like so many other backyards up and down the street. The development was one of the last to be built in the town limits, and it sat near the boundary of the state forest. The fact they lived so close to a nature preserve meant to the adults lots of hiking and biking on the trails, a chance for the kids to see wildlife, and learn about the woods firsthand. To their children, it meant a sense of danger, dark goings-on, and the perfect atmosphere for telling ghost stories during slumber parties.

“Fine, I will.” Sophie sat up taller on her blanket. It was her tent, her backyard, her house, with her family inside, hosting the slumber party. Taking the flashlight, she placed it under her chin, the beam casting shadows over the contours of her face.

“There was a house at the edge of the city that everyone called the glass house,” she began. “It looked like it was made all from glass, and it was strange to the people in the city. It belonged to the most wealthy family, the Greymalkins. They employed many servants and farmers in the past, people working on the land they owned. But these days, they had all but stopped hiring new staff.”

Margaret and Helen watched Sophie, listening politely. Kimberly pretended to be bored, and fiddled with a loose thread on her sleeping bag.

“The people didn’t really go near the glass house anymore,” Sophie went on. “The former staff, or their descendants, said that the Greymalkins were having troubles — illness, bad investments, and the like. They said that soon the family may be forced to sell the glass house and all their land.

“That was a shame, old Mrs. O’Connor said, as her grandson was coming back to town after traveling abroad for a few years, and he needed a job. He’d just completed his courses at an important university in another country, and he was well-trained in managing finances and keeping records. That was a very good thing, said Daphne, one of the few maids left at the glass house. Because the Greymalkins were looking for someone to do just that.

“And so Augustine O’Connor began to work at the glass house.”

Margaret and Helen were definitely interested now. Even Kimberly sat up a little more and glanced in Sophie’s direction.

“Daphne showed Augustine where he would work. It was mostly in one room, a study where all the family’s important papers were kept. After a few hours of working each day, he would go to the kitchens for a meal, and take a walk in the gardens if the weather was good. Most of the time, he only saw Daphne, or the cook, or the butler, Mr. Lee.

“One afternoon, just as he was finishing up, a very grand, and beautiful, woman came into the study. She wore a silver dress, and diamond combs in her hair. This was Lady Greymalkin, he knew, as he had seen portraits of her in the lobby of the glass house. Augustine quickly stood up and then bowed, as Mr. Lee had instructed him to do if he ever met a member of the family.

“Lady Greymalkin insisted he not bother about such a formality. ‘Thank you for doing this work for us,’ she said. ‘We need all our affairs in order before we sell the house.’ So it was true, Augustine asked, the rumors among the people? ‘Yes, I’m afraid so,’ the lady said. ‘Life has not gone…as we planned recently.’ Augustine gave his apology. ‘There’s no need to be sorry. It’s how things happen sometimes.’ And she invited him to tour the rest of the house with her.”

Outside the tent, it was quiet except for the chirp of crickets, and the occasional, brief passing of a car. Fireflies danced in the trees beyond the fence, but the girls didn’t notice.

“Augustine walked along the halls and saw the big dining room, the library, the grand parlor, where the family had entertained in happier times. Lady Greymalkin told him a little more about her children, her husband, and his parents, who built the glass house. When it was time for him to go, she invited him to tour the property on his own, as he wished.”

Kimberly couldn’t pretend anymore; she was listening as raptly as Helen and Margaret.

“A few days after this, the Lady came to find Augustine in the study,” Sophie continued. “She told him that they had a buyer for the land, and soon his services wouldn’t be needed anymore. ‘Thank you so much for your help. I’m sorry it means you’re out of a job. If I can do anything, please let me know.’ Augustine replied that a good reference would come in handy, but also, before he left, he’d like to walk around the gardens one more time. The Lady said yes, and that she would join him.

“As they walked, Augustine saw a door in the garden wall he had never noticed before. ‘Come with me,’ the Lady said, and she showed him a tunnel beyond the door. As they began walking down the tunnel, the Lady said, ‘Oh, I forgot, Mr. Lee needed to see me! Do wait here.’ And she ran back into the garden, shutting the door behind her.”

The back door of the house gently opened and closed. A shadowed figure slipped away from the lights inside, creeping into the yard and towards the tent.

“Confused, Augustine tried to open the door. He found it locked. There was only a little light in the tunnel, and he couldn’t see very far. Deciding he should wait as the Lady had told him to, he stood still.”

The dark figure paused near the tent, crouching down, trying to stay out of the light coming through the windows of his home.

Sophie’s hand was beginning to get tired of holding the flashlight, but she was almost done with the story. “Then a loud sound came from the other side of the wall, a sudden scream. Augustine jumped, and ran into the tunnel. As he ran, he heard other sounds, on either side of him, growls and snarls like those of wild animals. All the noise came out of nowhere, but it seemed to be all around him.”

Helen was spellbound. Margaret hugged her pillow close to her. Even Kimberly’s eyes were wide.

“Augustine stopped running when he realized the light was fading in the tunnel, and the noise seemed to be behind him. He stood in front of another door, and he wondered if this one would lead back to the garden, or to the glass house. He opened the door, and saw nothing else.”

A branch snapped in the yard, and something scratched at the tent. Helen and Margaret screamed, and Kimberly dived into her sleeping bag.

Sophie smiled and turned off the flashlight.

Daley Downing is an autistic author, parent to special needs children, a dance teacher, and cat whisperer. She spends her days attempting to write just a few more words than in the previous 24 hours, and lovingly refers to her genre as suburban fantasy. Visit her at: https://daleydowning.wordpress.com/.

For a chance to win a signed copy of Masters & Beginners, click the link below!

The Magic of Wor(l)ds (Spotlight) http://themagicofworlds.wordpress.com

Hey everyone! I did an author interview with Lisa Luciano, author of the mystery crime novel The Chosen Ones! It is a book that goes inside the scandalous & icy world of Olympic figure skating. Check out the video below: