I have the perfect book for you to curl up with while stuck indoors, called Intent: In the Shadows by Krista Wagner! 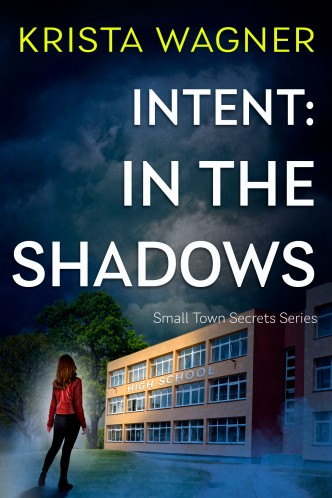 In the Shadows (Small Town Secrets #1)

It’s hard to enjoy high school when someone is stalking you. . .

Raylee, a pastor’s daughter, just wants to get through the last two years of high school. But it’s not easy when you’re an outsider. Or when the most popular girl in school’s goal is to make your life miserable.

Or when someone starts to STALK you. . .

When classmate Paul befriends Raylee, she is determined to ignore Crystal’s ploys. And when new student Billy arrives, Raylee finds herself drawn to his mysterious side. But Crystal is determined too, and she will do whatever it takes to keep him from Raylee and to ensure that the rest of Raylee’s high school years remain angst-ridden.

Raylee must cling to her FAITH in God more than ever, because someone lurks in the shadows, watching her, leaving scary clues, someone who wants to set her on edge. But why? Is it Crystal and her clique, or worse, someone she trusts?

*Book #1 is a clean mystery suspense appropriate for young adult and up.

It was time to play volleyball a few minutes later, and once again, Raylee proved her pitifulness at the game, missing every ball that came her way and messing up every serve. She was glad when the bell rang, anxious to escape her peers.

“Don’t worry about it. It’s just a game,” Katy was saying as they ambled toward chemistry.

“Ha, easy for you to say. You’re good.” Raylee was tugging on her sleeves; the shirt was a size too large, but it was the smallest available.

“I can help,” a male voice said from behind them.

They both turned around. Billy.

“What?” Raylee asked, feeling her cheeks burn and wishing she could slide into a hidden dimension.

“If you’re struggling with math, I could tutor you after school. I’m pretty good with anything math-related, especially algebra.”

Her mouth dropped open, an attempt to speak. Nothing came out. That dryness in her mouth was filling with unused saliva.

“Thank you, Billy. I’ll have to call my parents, but I should be able to meet you in the library.”

“Thanks a lot!” Raylee said to Katy when he was out of ear shot.

With a giant smile on her face, Katy replied, “You’re welcome.”

Her last class was impossible. She couldn’t concentrate on anything except Billy. She was getting sick of herself, it was ridiculous. This was what it must feel like to be lovesick. She’d always made fun of those romantic movies because the girls swooned over cute guys. She’d vowed to never be like one of those girls. And somehow, she’d become one of them.

Get a grip, Raylee. Get a grip.

The last bell of the day finally rang. Students scurried out to the parking lot. Raylee hurried to the front office to check with her parents about going to the library. Her mom answered and told her to go ahead. Raylee stopped by her locker to grab her math text and a notebook, hesitating for several minutes before she could bring herself to touch the metal door. Her skin crawled, remembering the horrific-looking rubber mask and the live worms forcing their way through it.

Slowly blowing out air, her heart hanging in the balance, she swung open the door really fast and hopped back a foot. All that was inside were her books and folders. No mask. No worms.

Her heart calming down, she snatched her math materials.

The library was located at the back of the school. She had to pass several classrooms to get there. Most of the lights had been turned down since teachers were already heading home.

As she neared the sharp corner that led to the main hallway of the library, a shadow, tall and misshapen, wobbled against the wall in front of her.

She took one quiet step back, locking her eyes on the twisted shape. The shadow moved toward her, one small step. Whoever it was was mimicking her.

She didn’t want to be afraid, but the feeling that someone was out to get her was overpowering.

She waited in the hall, hoping for the shadow to move, but it seemed to be waiting on her.

In the movies, the victims always asked, “Who’s there?” She wasn’t about to fall into that trap, which almost always ended up deadly.

Of course, they were in a school, there must be people close by, at least someone studying in the library. Whoever this was would be a fool to try something out in the open like this. That fact didn’t keep her from feeling cautious.

Willing herself to not let fear paralyze her, she took one stiff step forward. The shadow moved backwards this time. She took a second step. The arms of the dark obscure shape wiggled (like a worm) and she heard footsteps echoing down the hall.

Hoping to catch who it was, she pushed herself forward, breaking into a run, but by the time she rounded the corner, there was no one in sight, the door to the library open, a few students quietly studying, their heads down, oblivious to any strange sighting of a shrouded figure playing hide-and-seek.

Krista Wagner has been creating stories since she was seven and is best known for her mystery and suspense novels. Back in the 90’s, she was on her high school literary magazine staff, and she also co-authored a zine, a montage devoted to the creativity of multiple teenagers. Her short stories and poetry have appeared in several literary publications. She wrote her first novel at the age of 14, but it wasn’t until her thirties that she published her first book. Krista reaches into those chasms of darkness, dealing with themes of betrayal and deception and hope, with intriguing characters and intense story lines. All her books are for young adult and up.

“Dealing with danger and handing out hope” Krista Wagner, author of mysteries, thrills, and all that is real

I got more books! This means it was time to do another book haul and this was the best book haul I have done so far this year. I’m sure there will be more. Let me know if you have read any of these books and what you thought of them in the comments below!
Check out the video below: