How exciting! We’re now on book #3 of The Great Devil War multi-book tour — The Wrongful Death by Kenneth B. Andersen. Let’s see what epic adventure Philip embarks on in this exciting instalment! 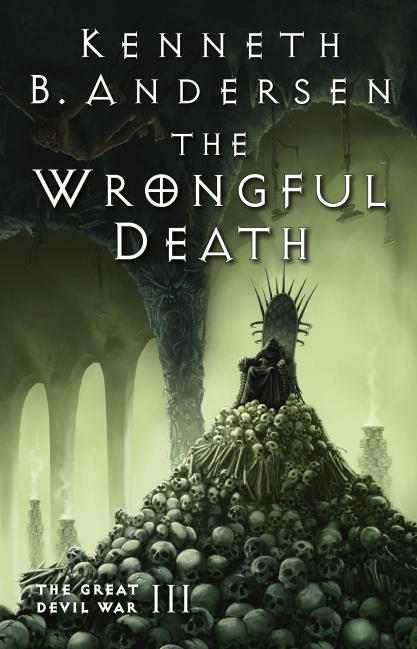 An unfortunate chain of events makes Philip responsible for the untimely death of the school bully Sam—the Devil’s original choice for an heir. Philip must return to Hell to find Sam and bring him back to life, so that fate can be restored. But trouble is stirring in Lucifer’s kingdom and not even Philip can imagine the strange and dark journey that awaits him. A journey that will take him through ancient underworlds and all the way to Paradise.

The Garden of Eden

The darkness of night turned into the light of morning, and although Philip did what Lucifer recommended and pulled his hood over his eyes, he was momentarily dazzled by the light. Slowly his eyes grew accustomed to the change, and out of the blinding whiteness, the Garden of Eden emerged in all its splendor.

First of all there were the colors. The green moss that lay like a thick carpet on the floor. The blooming flowers. The luscious tree canopy overhead and fruits hanging in bunches. The sky that was more blue than Philip had ever seen. The sunlight that fell between the leaves in warm streams of gold.

Secondly there were the smells. So many, and so clear, that Philip became dizzy and had to hold onto Satina so he didn’t stumble.

Then there were the sounds. A storm of bird songs, monkey cries, and distant, thundering waterfalls, and yet… quiet, so quiet.

Then, to top it off, the atmosphere—the feeling of the place… It carried him off his feet. The forest, the air, it inspired a feeling of pure joy that Philip had never known before. It made the hair on his arms rise with delight and made his heart, yes, his very soul, feel like laughing. It felt like… Well, like he was in Heaven.

“Horrible place, right?” Lucifer said, closing the door to the rock wall. “Too cold and much too bright in my opinion. Come on, it’s this way.”

Philip and Satina followed the Devil, who with long, decisive steps led them through the summer forest.

“We’re in Heaven,” Philip whispered as he heard the mild breeze softly stirring the leaves in the canopies overhead. “I can’t believe it. We’re in Heaven!”

“Not quite,” Lucifer corrected. “It’s merely the earthly Paradise that lies between Earth and Heaven. This is where the saved souls go after they die. They help tend the garden.”

“Between Earth and Heaven?” Philip said, confused. “I thought you went to Heaven when you died. If you’re good, that is.”

“No. You get this far and no farther. I realize a lot of people think that, Philip. There are even more who think Paradise is about lying in a hammock all day and letting God’s angels attend to your every need. But it’s never been like that. It would quickly lead to many of the seven deadly sins—laziness, gluttony, and greed, just to name a few—and that doesn’t exactly harmonize well with this place. No, living in Paradise means hard work. Of course, it’s nothing compared to working conditions down where we are.”

“Heaven is home to Jehovah and the angels. The angels come to Paradise, but they don’t live there. They live in Empyrean, the city of light. It’s even worse than this place. It makes my eyes itch and my nose starts running like a faucet. I’m definitely more comfortable here.” Lucifer plucked a flame-red rose, and it immediately lost its color and shriveled up. He smelled it and tossed it aside, the now metallic-gray flower disintegrating to ash as it hit the ground. “I have some good memories from this place.”

There was a subtle snap on their right as something in the forest stepped on a branch.

Philip turned his head and froze in his tracks.

It was a tiger. It ran toward them, its giant paws soundlessly bounding through the forest, and its amber eyes locked on Satina, who hadn’t noticed the wild animal.

“Watch out!” Philip shouted and pulled her toward him as the animal came bursting out of the brush, a cascade of yellow and black and teeth and claws.

“Philip, take it easy!” Beyond the rush of blood roaring in his ears, he heard Lucifer laughing. “It wouldn’t harm a fly.”

Fear turned into confusion and then amazement when he saw the tiger had stopped and just stood there, curiously watching them. Curious and…friendly?

“That’s what I’m saying, Philip. Paradise is a gruesome place. So sad and boring. Just look at this guy.” Lucifer walked over to the tiger and patted him on the back. “Tame as a lamb. Wild animals aren’t even wild here. In the afterlife they peacefully coexist.” The Devil sadly shook his head. “I get nauseous just thinking about it.”

… and I began writing when I was a teenager. My first book was a really awful horror novel titled Nidhug’s Slaves. It didn’t get published. Luckily.

During the next 7 years, I wrote nearly 20 novels–all of which were rejected–while working as a school teacher. The rest of the time I spent writing.

In 2000 I published my debut fantasy book, The Battle of Caïssa, and that’s when things really took off. Since then I’ve published more than thirty-five books for children and young adults in genres ranging from fantasy to horror and science fiction.

My books have been translated into more than 15 languages and my series about the superhero Antboy has been adapted for film, which is available on Netflix. An animated tv series is currently in development.

A musical of The Devil’s Apprentice opened in the fall 2018 and the movie rights for the series have also been optioned.

I live in Copenhagen with my wife, two boys, a dog named Milo and spiders in the basement.

About THE GREAT DEVIL WAR: The Great Devil War was published in Denmark from 2005-2016, beginning with The Devil’s Apprentice.

Even though the story (mostly) takes place in Hell and deals with themes like evil, death and free will, it is also a humoristic tale about good and evil seen from a different perspective. A tale that hopefully will make the reader – young or old, boy or girl – laugh and think.

Welcome to the other side!

Giveaway: Digital copy of The Wrongful Death! Enter below!

The Magic of Wor(l)ds (Review) http://themagicofworlds.wordpress.com

Phantom of the Library (Review) https://phantomofthelibrary.com/

I was tagged to do the Books and Bakes Tag !! It was so much fun and be prepared for all the randomness that is me 😜